MATOU (pronounced MAH – TOE) is a group of Indigenous musicians and performers who collaborate in the performance of original compositions that celebrate indigeneity, cultural strength,perpetuation of tradition and express a love for nature and the geographic areas that each hail from.
The group is a collaboration of Native American and Māori musicians and performers who each bring with them their own recording and performing backgrounds. While the group performs material from each primary artist, they also have composed original numbers that celebrate who they are and where they each come from.

THE MUSIC
It is difficult to describe the music that MATOU creates as one musical genre. There is a fusion of Native American flute music with the powerful traditional chants of the Māori and Lakota; acoustic guitar mixes with beautiful vocal harmonies to create a mellow, yet exciting sound; funk beats combine Native American rattles and drums. At best, the music created by MATOU can be described as a fusion of pow wow drum beats, Native American rattles, koauau (Māori flute), Lakota cedar wood flutes and haunting vocals supported by guitar and percussion. With a focus on Indigenous creativity and musicianship MATOU entertains and educates audiences in the ways of the indigenous peoples of the nations represented.

SONI MORENO is a well known Native American singer who founded and has performed with the Women’s vocal group, Ulali, for a number of years. Soni has appeared on Broadway in “The Leaf People” and was involved in the production of “Bones” from the Banff Cultural Center in Canada.

TIOKASIN GHOSTHORSE is a seventh generation Lakota flute maker and player. He has mesmerized audiences with the dulcet tunes of his cedar wood flutes. While working to preserve the cedar wood flute culture, he has educated many in this ancient musical tradition. One reviewer called him “a cultural resonator in the key of life.”

ATAAHUA PAPA (Ata) is Māori (indigenous New Zealander) and hails from the Central North Island, belonging to the Waikato and Raukawa tribes. Ata has been singing and dancing since she was 4 years old and has been immersed in Māori language, custom and tradition.

Moreno, Ghosthorse and Papa share a commonality based on ancient tradition. They are in their own right dynamic, vibrant, enthusiastic, highly motivated and accomplished artists, not only individually but also serving the communities at home and the world at large.

MATOU enjoys the support of talented musicians:
Charley Buckland is a multi‐dimensional creative performer who carries an Indigenous perspective from his Mohegan heritage. He is a bassist, singer/songwriter, classically trained trumpet player and flutist.

Donna Kelly—drummer and percussionist. Donna has played in some of New York’s well known venues with many different groups of various genres including jazz, rock, R&B and cabaret.

Ettie Luckey– cellist, is a graduate of the New England conservatory. A native of North Carolina resident in Connecticut, Ettie is a member of Elite Syncopation, a ragtime jazz quartet and assistant principal of the greater Bridgeport Symphony. 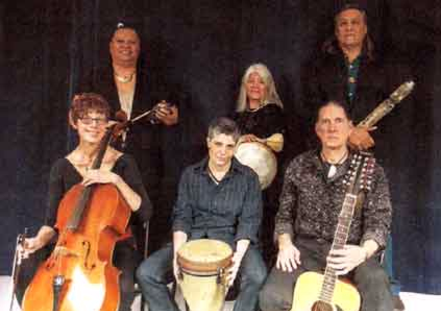